A Bridge Between Worlds…

I’ve always loved a good crossover. That’s just something the nerd in me can’t resist. I would become super excited as a kid whenever The Six Million Dollar Man and Bionic Woman would have a crossover event. An episode would start on one show and end on the other. It’s still true now, I geek out whenever The Flash makes an appearance on Arrow (and vice versa).  And it always worked for Buffy and Angel, even when they were on different networks, just like it did for that other super-couple Jamie Sommers and Steve Austin.

When Angel (repentant vamp and Buffy’s former love) left Sunnydale all those years ago, we knew he’d be back, and likewise, Buffy wouldn’t (couldn’t) stay away from him either. With dark slayer Faith (portrayed in the series by Eliza Dushku) traveling back and forth between both shows, there was always a bridge, and always a chance for a crossover event. Angel even shows up briefly during the Buffy finale.

Is it any wonder then that the writers of both Buffy the Vampire Slayer and Angel & Faith comics have teamed up to create a season that allows each series its’ own arc, while still letting one be part of the other’s story as well.

We all know that whenever Angel turns up in Buffy’s world, it means angst and complications. Having your first love show up while you’re involved with your current love is hardly a simple matter (read messy and awkward). I call this the “ex-boyfriend barbecue”… and I’ve been there myself… but I digress, as I often do…

Ever since the “Love Dares You” arc, starting with this season’s eleventh issue, Buffy and Spike have reconnected romantically, and after many long years of waiting, fans let out a sigh of relief (myself included). Of course,  hi-jinx must ensue when Angel is called, by none other than Spike (Buffy’s other on again/off again/currently on again beau) to aid in their latest fight against Archaeus, an ancient demon who has been tormenting both Angel and Spike. There is way too much history between these three, going back to when Spike was sired (turned into a vampire for the newbie) by Drusilla (who was sired by none other than Angel). There was a whole lot of siring going on back then. Oh, those wacky vamps! 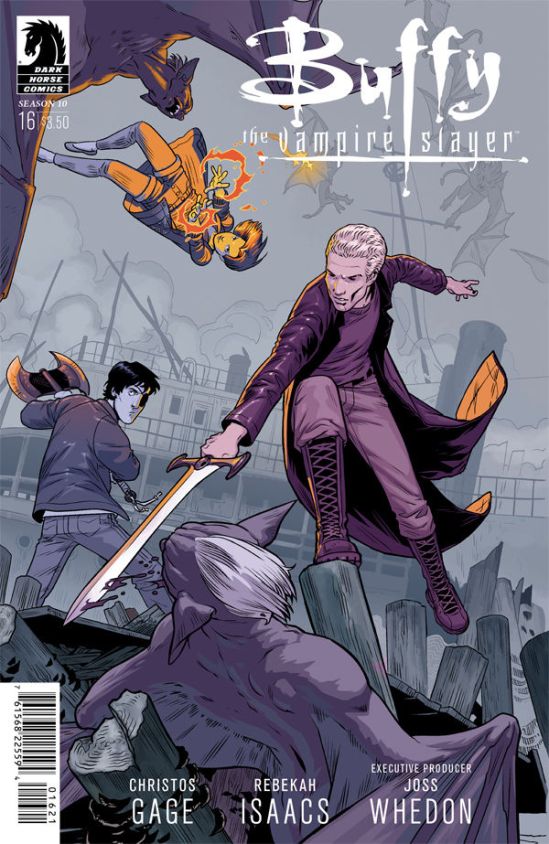 Suck Up and Deal…

Of course, there’s no time to wallow in hurt feelings and awkward silences when there are demons to slay, and the old team bands together to do just that, in their own unique fashion. Equipped with banter aplenty and sharp and pointy implements of death and destruction – not to mention a whole lot of hacking and slashing – they get to the task at hand. However, it’s just the beginning for our Scoobies, and the big bad for this season has yet to be dispatched.  After all, what would a crossover event be without a cliffhanger?

As always, the team of Christos Gage and Rebekah Isaacs aim to please and do not disappoint, and Steve Morris’ cover art always impresses.

While each series can stand on its own, do yourself a favor and pick up both Buffy and Angel & Faith Season 10 books. They’re even more fun together.

For more on Buffy the Vampire Slayer Season 10 and Angel & Faith Season 10 from Dark Horse Comics, check out my reviews at Skeletonpete.com.