K-9 Returns…
You can’t keep a good dog down, and it seems, even after almost 40 years, our beloved robotic canine (get it?) appears to have more lives than a cat. K-9 is set to return again, this time in a standalone film of his own. The inner-seven-year-old inside me couldn’t help but get excited when I read earlier this week that K-9 would be back. He was part of my childhood. I first fell in love with Doctor Who during the Tom Baker era, and for me, K-9 was part of the family.

It was announced earlier this week that K-9 Creator and writer Bob Baker, along with Nick Park from the Wallace and Gromit series, is producing the film K9: TimeQuake, which is due out in theaters in 2017 and will feature our robotic hero facing off against a classic Doctor Who villain from the 3rd Doctor and 5th Doctor eras – Omega.

Omega staring down at the The Second and Third Doctors (Patrick Troughton and Jon Pertwee) in “The Three Doctors” (1973).

Omega, a legendary Time Lord himself and an intergalactic engineer, had been credited with founding early Time Lord society, along with the great and mighty Rassilon, and with harnessing the power from a supernova to give the Gallifreyans mastery over space and time. Unfortunately, Omega was trapped in an anti-matter universe and had gone mad as a result. He has come close to destroying the galaxy more than once, only to be stopped on each occasion by The Doctor. Omega has appeared in several Doctor Who stories including – The Three Doctors 10th Anniversary Special (with Stephen Thorne as Omega) (1973) , The Arc of Infinity (with Ian Collier and Peter Davison as Omega) (1983) and the Big Finish 5th Doctor audio Omega (2003), with Ian Collier reprising the role.

K-9 Mark I (as voiced by John Leeson) and The 4th Doctor (Tom Baker) in the TARDIS.

A Girl’s Best Friend…
K-9 first appeared in the 4th Doctor adventure The Invisible Enemy (1977). He was the creation of Professor Marius, in the year 5000. K-9 joined The Doctor and then-companion Leela (played by Louise Jameson) on various adventures. With his computerized brain and laser snout, K-9 soon proved to be a valuable member of the crew.

Even after The 4th Doctor left Leela on Gallifrey with K-9 Mark I and Romana in E-Space with K-9 Mark II, we knew we hadn’t seen the last of our beloved tin dog. K-9 seemed to have as many lives as The Doctor, returning for not just one, or two, but three TV spinoffs, several specials and Big Finish Audios over the years.

K-9 Mark III was left as a gift for former companion Sarah Jane Smith from The 4th Doctor in the TV pilot K9 and Company (1981) – the first attempt at a Sarah Jane spinoff (starring Lis Sladen). K-9 resurfaced again in the The Five Doctors 20th Anniversary Special (1983), with Sarah Jane, and yet again for the David Tennant story School Reunion (2006), reuniting Sarah Jane, K-9 and The 10th Doctor.

Lightning struck twice for K-9 and Sarah and the result was the hit BBC Kids series The Sarah Jane Adventures (2007-2011). Sadly, K-9 Mark IV was trapped in a void for most of series, as he was promised to DisneyXD (featuring modifications and design changes – I favored his original design) for a K-9 Series (2009-2010) for Australia. Each time he was voiced by the original actor John Leeson (actor David Brierly voiced him briefly in 1978).

Initial Reaction to “TimeQuake”…
To be honest, I’m having trouble seeing this work on the big screen and don’t understand why they haven’t just done a theatrical release based on The Doctor (yes, they made two movies with Peter Cushing, but that was a long time ago).

I held out hope that K-9 would return to the current series of Doctor Who alongside Peter Capaldi’s 12th Doctor. Let’s face it, Capaldi would have a blast, and K-9 would quickly endear himself to the irascible old Time Lord, as well the rest of us, as he always does.

I also held out hope that Time Lady Romana and K-9 Mark II might have survived the Time War and resurfaced during the 9th Series along with the resurrected Time Lords, or Team Sarah Jane: The Next Generation featuring her kids (now grown), might end up working for U.N.I.T. with K-9 Mark IV at their side. A gal can dream, right?

Instead, the Time Lord’s best friend will be fighting the big bad alone, facing off against one of The Doctor’s oldest enemies. Not sure how that will play out, but happy to hear K-9 is still out there, fighting the good fight.

Here’s a classic moment with K9 Mark I and Leela (Louise Jameson).

And another, a rare clip featuring an inebriated (not sure how) K-9 Mark II with Romana Mark I (Mary Tamm) and The Doctor Mark IV. Enjoy!

Ok, now I feel vindicated when I say “all roads lead back to Doctor Who“. For those who haven’t guessed by now, the longest-running British science fiction series Doctor Who, happens to be my all-time favorite TV series. Further evidence supporting my “all roads” claim came today in the form of the latest casting news for the time travel drama Outlander. 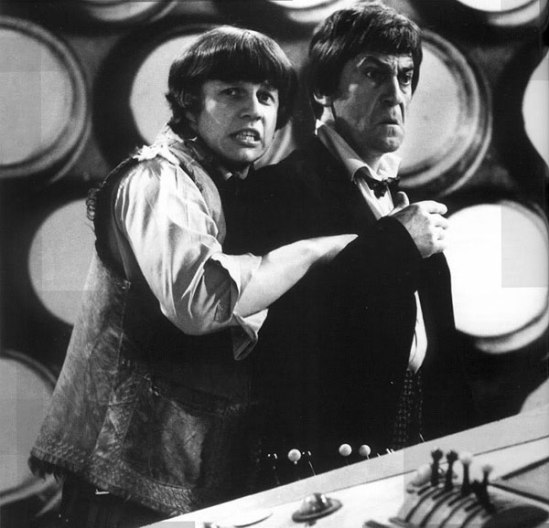 I was excited to hear that Frazer Hines, best known for his enduring portrayal as Jamie McCrimmon on Doctor Who, was cast on the new Starz series Outlander, as Sir Gordon Fletcher, the English warden of Wentworth Prison in Scotland.

YOU CAN’T KEEP A GOOD SCOT DOWN

James Robert McCrimmon (Jamie to his friends) joined The Second Doctor (Patrick Troughton) on board the TARDIS after the Battle of Culloden in 1746.  Jamie valiantly fought Daleks, Cybermen, Yeti and Ice Warriors alongside the Time Lord – when he and co-stars Deborah Watling (Victoria Waterfield) and later, Wendy Padbury (Zoe Herriot), weren’t running for their lives that is.

One of the few male companions to grace the TARDIS, Jamie endeared himself to fans as the brave, kilt-wearing young Highlander. Inquisitive, fiercely loyal and devoted to The Doctor, to this day, Jamie is considered one of Doctor Who’s most popular companions. 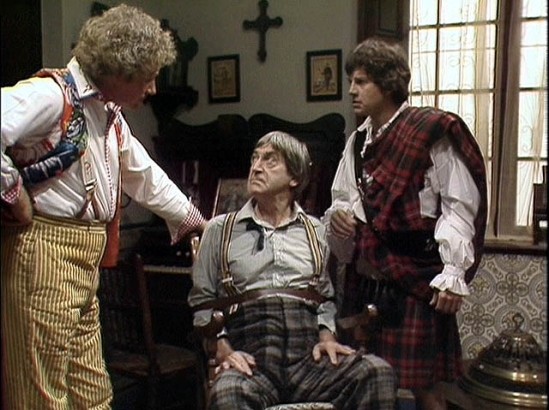 Frazer left the series in 1969 in the ten part story The War Games, which introduced the Time Lords, on The Doctor’s home planet of Gallifrey. It also saw the departures of Wendy Padbury and Patrick Troughton. The Doctor, placed on trial by the High Council of the Time Lords, was forced to regenerate (into Third  Doctor Jon Pertwee) and exiled to Earth in the 1970’s – his sentence for contravening the First Law of Time. Sadly, Jamie and Zoe were returned to their respective timelines and their memories were wiped. They would no longer remember the adventures they had shared with The Doctor (almost, but not quite as heart-breaking as Donna Noble’s memory wipe, but I digress…).

Jamie was so beloved that Frazer returned to Doctor Who nearly two decades later. He had an all-too-brief cameo in The Five Doctors 20th Anniversary Special (1983), during the Peter Davison (The Fifth Doctor) era, and he was reunited with Patrick Troughton in The Two Doctors (1986), during the Colin Baker (The Sixth Doctor) era.  The 10th Doctor (David Tennant) even uses Jamie’s name in Tooth and Claw (2006).

ALL ROADS LEAD BACK

Author Diana Gabaldon revealed her Outlander books were inspired by Frazer’s portrayal on Doctor Who, and that makes this casting news even sweeter.

As a long-time fan of Doctor Who (and a fan of Jamie’s), I keep hoping for an on-screen reunion between Jamie and the current Doctor. We know how The Doctor hates goodbyes and Jamie isn’t supposed to remember him, but come on, there has to a be remedy for the Gallifreyan Memory Wipe surely?

Jamie does make a welcome return in the BBC sanctioned Doctor Who Big Finish Audios, but, like Sarah Jane Smith (played by the late Elisabeth Sladen), he’s one of those companions we keep hoping will crop back up again in the current series.

In the meantime, I look forward to seeing Frazer Hines in future episodes of Outlander.

For more on the Outlander series of books, visit Diana Gabaldon’s site.

For more on the Big Finish line of audios, please visit their site.

Doctor Who returns to our screens on August 23rd.